Author Alex Owens and "Kill Me": A Blood Chord Novel 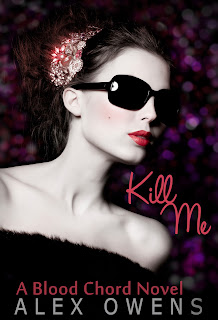 What was the spark that started you down the path to writing?


To be honest, I don’t really remember. I was pretty young when I started making up stories in my head and not much older when I started writing them down. The creative spark of youth is a bit harder to hang onto over the years though, so I finally decided to get serious about writing within the last year or so.

Do you have a favorite scene or character in your book?


I have a few, but if I have to narrow it down I’ll go with the scene where the main character Claire is drawn to the bewitching sound of music coming from a convention booth. It is there that she first meets Bette and is encouraged to try her hand at the haunted violin that can only be played by the supernaturally gifted. Everything changes for Claire with that scene.

Boxers or briefs? Kidding! Do you write with a pen and paper, or go straight to the laptop?


Boxers, duh! Briefs might as well have neon superheroes printed on them. Seriously though, I started out handwriting, but l am too lazy to write out everything, then have to type it all over again. I even write small bits on my phone and paste them into the manuscript later, all in the name of saving time.

How long does it normally take you to write a rough draft?


That depends on my current level of procrastination. I’ve knocked out a full first draft in thirty days before, when life and motivation allowed. Other manuscripts I’ve worked on in fits-and-starts over the years—and they’re still not done.

What made you decide to go indie and not go after a more traditional publishing path?


If the right traditional deal came along I’d consider it, but there are things traditional publishers won’t touch, like novellas and short story collections. I enjoy writing those and it seemed a waste to just leave them on my hard drive. Plus, I don’t work well when I know it’s “work” so if I had to write according to someone else’s deadline and creative direction, it would eat at my soul. Well, not really, but it would sure feel like it.

What is the hardest part and best part about self-publishing for you?


Answering only to myself—that’s both the hardest and easier part about self-publishing. On one hand, I have complete creative control; I set the pace and tone and a book doesn’t go out of the door until I’m satisfied with it. On the other hand, if the book gets bad reviews or fails to find an audience, that falls all on me.

Any words of advice for up and coming (or still learning) authors?


You know those t-shirts you see everywhere now… the “Keep Calm and Carry On” ones? Being a writer is like that. Keep writing, no matter what. As long as you keep at it, working to craft the best story you can, the writing will improve and you will find your audience.


Three days ago, Claire was a wife, a mother, and very much alive... then the music called for her.Claire has one goal for the conference-- to land a few whales so that her boss will give her a badly needed raise. She pitches and prays while courting the music industry elite until her plans are derailed by hotness-in-high-heels. Bette is at the conference on a mission--to find a human with untapped talents that she can mold and control. Bette uses her cursed violin to lure Claire in with a haunting song, which unravels Claire's life as her new talents emerge. To make matters worse, Claire is attracted to two unlikely people-- Bette and her hunky associate, Gregor. Both can light Claire's fire, but is either of them the only one? Unfortunately for Claire, life isn't all song lyrics and seduction. Tied to darkness by blood and power, Claire must harness her abilities if she has any hope of returning home to her daughter and regaining her former life... if that's what she really wants.

Kill Me (A Blood Chord Novel)


Alex Owens is a woman with little free time, which means she stays up all hours of the night putting pen to paper. By day she's June Cleaver in jeans, and by night she writes. Somewhere in the middle of all that she finds time to tend 'dem babies, fry up the bacon and curl up with a good book (or ten), much to the chagrin of her family. She's currently at work on her Blood Chord Series, with book one just released and book two due out in late summer 2012!

Thanks for having me!