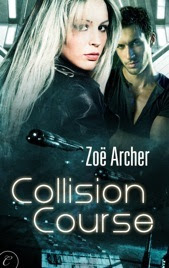 Now that I have a Kindle, I can finally catch up with all the e-books I’ve been wanting to read and couldn’t. Starting with Ms. Archer.

Zoe Archer is officially one of my new favourite romance authors! I’ve read her Blades of the Rose Series and just finished her sci-fi romance Collision Course which follows Mara Skiren, Scavenger extraordinaire and Kell Frayne, 8th Wing Commander, as they battle the PRAXIS(Not unlike the Empire in Star Wars), smugglers, drone bots, plasma rays, Liden’s Lash (a meteor belt that is on fire) and not to mention their feelings for each other. Which by the way are hot, hot, hot!

Mara is coerced into helping the 8th Wing and Kell is sent with her on a rescue mission deep into territory that only smugglers and scum traverse. Which is why Mara’s help is so crucial being a scavenger herself. Right off the bat the two protagonists lusty feelings are apparent and the sensuality builds with each page, despite the fact that they are on opposite sides of the fence.

Good things about this book- Great characters, fantastic dialogue, very Star Wars feeling without going overboard and making me say, “Oh, that’s just like Return of the Jedi”, sex scenes were HOT but not overdone and the two characters didn’t just jump into bed after meeting there was a lovely build up of tension and the ending was more than believable and, of course, as all romances go, very happy.

Minor improvements- I personally would have loved to see some more build up before the first chapter. Meaning I would have liked some more insight into Mara’s past as when you learn about it there is a desire to know just how she survived her last fifteen years coming from the beginnings she did.(Can’t say more without putting in a spoiler alert) With Kell, it’s easier to see how he became the man he is from the story of his past, but with Mara I think I could have used more background in order to really believe her history, but really, that’s only a minor complaint.

I very much enjoyed the book, it is the first Sci-fi romance and I was pleasantly surprised at the satisfaction the blend of the two genre’s brought. Action, adventure, romance and moments of humour that made for a great read and one I would highly recommend.
5 Stars